“With a better understanding of the conditions under which a colloidal system will transition to a ‘superionic’ state, there is now the possibility of tuning fast transport of mass or colloidal entities around a colloidal crystal." 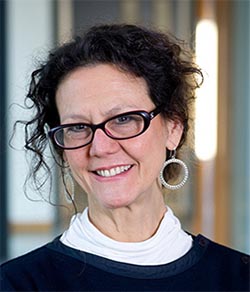 Suitable solid-state ionic conductors are a key to producing new safe and efficient batteries. Candidate materials for solid-state batteries are superionics, which show a transition from an insulating state to a conducting state in which one ionic species is mobile.

Recent work supported by the Center for Bio-Inspired Energy Science (CBES) could make it easier to study properties of these superionic materials.

Led by CBES deputy director Monica Olvera de la Cruz, Lawyer Taylor Professor of Materials Science and Engineering at Northwestern, a team of researchers observed a classical system that exhibits a transition between insulating and conducting states. The group hopes this will accelerate the development of safe solid-state batteries, with the usage of metallizable colloidal crystals for future prototypes.

“With a better understanding of the conditions under which a colloidal system will transition to a ‘superionic’ state, there is now the possibility of tuning fast transport of mass or colloidal entities around a colloidal crystal,” Olvera de la Cruz said. “This may lead to the construction of functionalized colloidal crystals that can quickly react with a substrate carried by the smaller, mobile species.”

The paper “Metallization of Colloidal Crystals” was published November 11 in the academic journal Physical Review Materials.

The transition between insulating and conducting states is called “metallization” because the mobile ions in the compound behave like electrons in metals. Using computational and numerical analysis, Olvera de la Cruz and her colleagues found related insulator-like to metal-like transitions in size-asymmetric binary colloidal mixtures.

The components of the binary colloidal crystals they studied are much larger than atoms and electrons, and their arrangements can be observed in optical microscopes. Therefore, the researchers avoided using the mathematical framework that describes atoms and electrons — quantum mechanics — and instead employed classical mechanics to provide a more general explanation of the transition.

The investigators found that vibrations of the larger and mostly static species enable the mobility of the smaller colloidal particles. This process has a subatomic analog in which coordinated motion of vibrating protons gives way to conducting electrons, which is seen in some atomic materials exhibiting an insulator-to-metal transition.

The research team’s observation of a metallization transition in a system with no charge is important given that these systems are not limited by charge conservation laws and therefore are highly tunable.

This is a key step because the demonstration of the robust nature of metallization in colloidal crystals using a simplified system lays the groundwork for other groups to explore their use in new physical systems for colloids such as within solid-state batteries. The researchers also gave more credence to the use of colloidal crystals as a model for quantum physical phenomena. Colloidal systems are easier to manipulate and visualize and can lend insight into properties of the atomic materials.

Finally, the highly mobile nature of one species within a medium of an ordered static species is quite unique among equilibrium colloidal crystals, and the identification of transitions that produce this state could arouse interest from other fields such as active matter or self-healing materials.

“Given the quantum physical nature of the insulator-metal transition in atomic crystals, it is surprising that we can recover this transition in a classical system of colloidal particles,” said Hector Manuel Lopez de la Cerda Rios, a PhD student in Olvera de la Cruz’s lab who co-authored the research. “This opens the doors to using colloidal crystals to possibly better understand certain processes at the atomic and subatomic scale.”

Olvera de la Cruz’s group previously identified the existence of “metallic” colloidal crystals in DNA-functionalized nanoparticle mixtures with complementary DNA strands. The study builds on that work by revealing the transition between colloidal crystals that behave more like insulators and crystals.

Further research steps the team aims to pursue include finding the point when the analogy to metals breaks down, discovering the colloidal crystal’s macroscopic properties and how they compare to metals, and studying how these metal-like colloidal crystals respond to external stresses.

“It would be useful to explore this phenomenon experimentally using colloidal crystals held together by a wider variety of interactions,” said Ali Ehlen, a PhD student in Olvera de la Cruz’s lab who co-authored the research.

This article was first published by the McCormick School of Engineering.