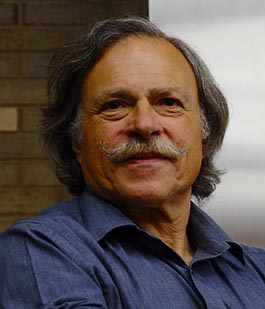 The Chaikin group recently programmed micron-sized colloidal clusters with structural information stemming from a nanometric arrangement. Using the functional flexibility of DNA origami in conjunction with the structural rigidity of colloidal particles, Chaikin demonstrated the parallel self-assembly of ~108–109 three-dimensional microconstructs, with highly specific geometry that includes control over position, dihedral angles, and chirality. These experiments introduced hybrid DNA origami-colloid structures, advancing DNA nanotechnology to the micron regime and beyond.

In this phase of CBES, Chaikin’s group creates clusters of microscale particles with prescribed geometries encoded using responsive interactions based on DNA hybridization. Networks of DNA “belts” with prescribed angles, lengths, and bending rigidity are assembled in solution and then adhered to the particle surface through DNA hybridization of sticky ends. These DNA belts are designed to present several different sticky ends at precise locations on the particle surface; other particles presenting complementary sticky ends will bind only at these locations. Importantly, by varying the sequence and length of the sticky ends, each bond is designed to form or melt under different conditions, such as temperature and ionic strength. As a result, the cluster geometry at one condition is different from that at another condition. This approach enables the cluster to change shape and symmetry at different points on the stimulus landscape.