A Silicon Ratchet to Produce Power from Below-Bandgap Photons

We show, with a 3D model of silicon under incoherent THz irradiation, that below-bandgap excitations (free carrier or intraband absorptions) can do useful work by exciting, i.e. flashing, electrons in and out of a structurally embedded ratchet potential. 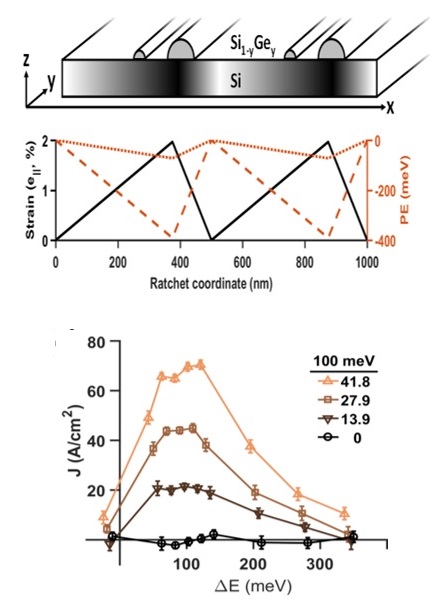 Top: Schematic of the device simulated. Multiple strips of silicon-germanium alloy could create the strain gradients (shown as graded shaded regions) in an experimental system. Middle: the ratchet potential (orange) that results from gradients in parallel strain along the x-direction.

Bottom: Current density as a function of the average depth of the wells in the ratchet potential, ∆E, for irradiation of the Si ratchet with 100 meV photons and a series of irradiances (MW/cm2).

This new photovoltaic mechanism uses wasted below-bandgap absorptions to enhance the directional diffusion of charge carriers, and could be used to augment the efficiency of traditional photovoltaics.