When did you become interested in science and how did you eventually choose chemical engineering for your field of study?

When I was young, the toys that my parents bought me usually needed to be assembled into something, like a robot or a car. I thought it was really fun to assemble small parts into something that is bigger and has a function, and I believe that is where my interest in science and engineering began. 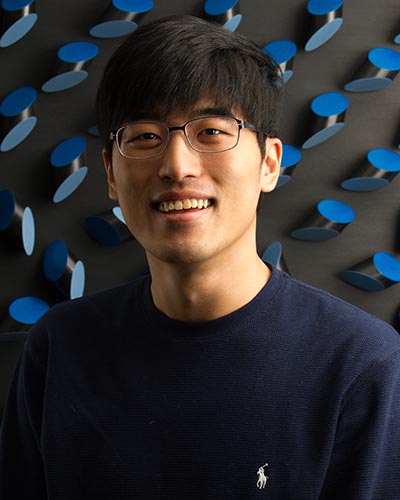 Later, I had the chance to be an undergraduate researcher in a lab where I worked on mathematical models to predict the swelling behavior of polymeric gels. This is when my interest in chemical engineering research really grew. It was fun to understand the properties of the molecules and see how this knowledge can be used to predict the behavior of larger particles.

How would you summarize the work you performed in CBES?

For the first project, I studied a hard particle system which involves a particle that interacts only by the particle’s shape, without any energetic interaction between the particles. Because these particles interact only through their shapes, it was a good system to understand how the shape affects assembly behavior. Using computer simulations, I tried to find out what shape enables formation into crystals with interesting structural properties.

For the collaborations with the Mirkin group, we researched how to use DNA strands as a kind of glue between nanoparticles. If the experimentalists attached DNA strands with a certain sequence onto the surface of a nanoparticle, that DNA-coated particle interacted with the other particles in a specific way. Using that technique, we tried to find the appropriate shape of the particles as well as the proper DNA sequence that would promote the assembly of the particles into the desired crystal structure.

What do you see as future applications and directions for this line of research?

In one work I published in Science in 2017, which was one of the collaborations with Chad Mirkin’s group, we assembled gold nanoparticles into a clathrate structure. Clathrates consist of polyhedral “cages” that are connected within a crystal structure, and these cages are well-known for energy storage or hydrogen storage in molecular clathrates such as gas hydrate systems.

We found that if we modified the shape and surface functionality of the nanoparticles, they could assemble into very complex structures with potential applications in storing energy or biological materials. At the time, this was the most complex structure that had been discovered through programmed assembly.

Other gas hydrate systems which have the same structure as the clathrates are on a molecular scale, so these can store only small molecules such as hydrogen or a natural gas like methane or ethane. However, our structure composed of nanoparticles has a size of around 200 nanometers, so we can use our structure for storing much larger materials.

We have several more projects that will be published soon, including investigations into the optical properties that we can achieve through modifying the shape or DNA-functionalization of these particles. We are still improving on our work from CBES and trying to find different directions and other applications to pursue.

It sounds like the Science paper was a major highlight of your graduate school career. Do any other papers or projects stand out?

Another project supported by CBES resulted in a PNAS paper published in 2019, and this was purely computational work.

You recently joined the laboratory of David Baker at the University of Washington as a postdoctoral researcher. What are your plans for this appointment, and are there any topics or questions you hope to explore in the future?

After exploring this in my postdoc, I would like to mix the experiences from my PhD and postdoc work when I start my own independent career and find the best way to design particles, regardless of whether they are biomaterials, metallic materials, or polymer materials. I want to continue to design particles that can assemble into structures with useful properties.